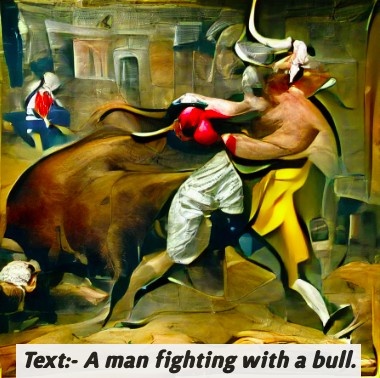 I’m now going to work with a multi-modal deep learning architecture called clip that is going to link text with visual elements. I’ll be combining it with a generative model, a transformer type of architecture so that I can take a text prompt and generate visuals and images, even make videos of sequences from that text prompt.

Let’s work with two cutting-edge generative architectures that are going to allow us to do multi-modal generation. The ability to connect different modalities, in this case, text and images. Text and visual elements with a combination of two architectures: CLIP Architecture (by OpenAI) and Taming Transformers

The trained model predicts which encoding of text and what text encoding corresponds with what encoding of what a visual encoding.

Type of generative architecture that can create and invent text to follow the text prompt with more and more text. This is a different kind of transformer that uses an architecture called VQGAN. It combines elements of convolutional architecture with GAN types of elements. It uses a codebook, works with patches.

Creating the sequence of text elements is not very difficult but images have a very large no. of pixels which leads to the creation of long sequences in transformers.

But we can solve this by using - by working with patches. 16 x 16 patches of pixels so we reduce the dimensionality of the problem.

Codebook trains the network to learn matrices instead of working with pixels directly. It learns kinds of representations of parts of the image that are stored in the codebook, and then when it does generate through the decoder, it works by taking parts of the codebook. (It has different parts, convolutional, decoder, etc.)

Take the text phrase and pass it through the CLIP architecture to encode it. And get that encoding in 512 numbers (encoding of the Architecture, understanding of CLIP architecture of that text). Do the same thing with the image, but instead of sending the image as it is, augment it, rotate it, move it or create crops of it (20, 30, 40, 50,….). In this case, I’m gonna create 30 different crops. It is done to help the architecture to understand the image better by giving it multiple versions of it. So, I’m gonna send 30 crops of image clips (with specific rotations, translations) and encode its understanding of those crops. 30 sets of encodings or 512 values.

What we want in the result:

What we don’t want in the result:

What we want to apply to all of our include prompts:

Then watercolor paper texture will be applied to all of the include prompts.

Also, one can begin the generation from a specific image/picture instead of noise input, and modify, edit that image in the direction specified by the text prompt.

After generating new images, I’m gonna show you the capability of creating interpolations between the latent parameters generated by the process and then produce a video that shows the interpolations from one of the creations to other creations, and then show the video on a screen.

The CLIP downloads a pre-trained model, so we don’t need to train CLIP, we can proceed to use it in inference, eval mode to encode texts and images directly.

And clip Model visual input resolution 224 pixels. This means, when we encode images in CLIP, we need to set them to 224 pixels.

Here, vqgan_imagenet_f16_16384 means VQGAN image net is trained with images from the image metadata set f-16 because the file is named using downsampling factor f16 for each. And 16384 is codebook dimensionality.

Both links heidelberg.de are working to date in Nepal, but if they don’t work in the future there should be some alternative.

By running this, it downloads Heidelberg’s pre-trained VQGAN model, last checkpoints and configuration information that will be in model.yaml file.

First, create a function for load configuration using library OmegaConf and dump to YAML file to see the configurations.

Second, create another function to load the VQGAN model. Use the previously imported model with the config file. Load state_dict dictionary that contains all the parameters of the model. And load checkpoint with path, map location to “CPU”. Now load the dictionary into the model.

Here, we’re going to use a model directly, no need to train so put it in evaluation or eval() mode.

The third and last function is Generator. Take input and generate images from it. For this input is passed through the taming model and output is passed to the decoder.

Then load configurations on the model.

(The models folder is within the taming-transformers folder as we did before, so paths are relative to the content of that folder)

Declare the values (Latent space, parameters) that we are going to optimize:

Here, multiplying by .5 is because personally experimentally it is found to be good before taking data from a normal distribution.

Then, in recurrent neural networks, they have clear indications of the positioning of the elements based on architecture itself but in transforming architectures, you just push all the data at once. Which means it is the use of periodic mathematical functions to embed positioning information within the data. And we’re using mathematical sine.

Finally, create a helper function. In this call that function(Parameters), on-call refresh and reset those parameters then declare optimizer. (Adam optimizer is used for this.)

Here, normalizing is required in this architecture so define a variable and use values for the mean, variance that has been prepared already for us.

Create a function that receives the text then calls CLIP model to tokenize the text. Pass result through the encode function of the model and detach the result from the computation of gradients and will clone the results so that we can use our own memory space on the variable.

Now define a generic function that will be applied to exclude, include, and extras of our prompts.

When sending the image to encode, we’re not gonna send a single image. We also send a set of crops of the image. To declare a variable for augmentation transformation of the image. After doing some random rotations then some translations and remaining are filled with zeros.

Note: The augmentations are first applied to the single image produced by the generator and then from that output, the different crops are created.

Initialize parameters and optimizer and make a simple test to generate an image through a transformer generator with random initial parameters. Call generator function and pass parameters we declared before and put the result back on the CPU. It will return 1 in the first dimension then three channels, 448, 448. (1 x 3 x 448 x 448 [450, 450] but we get 448 due to rounding.) 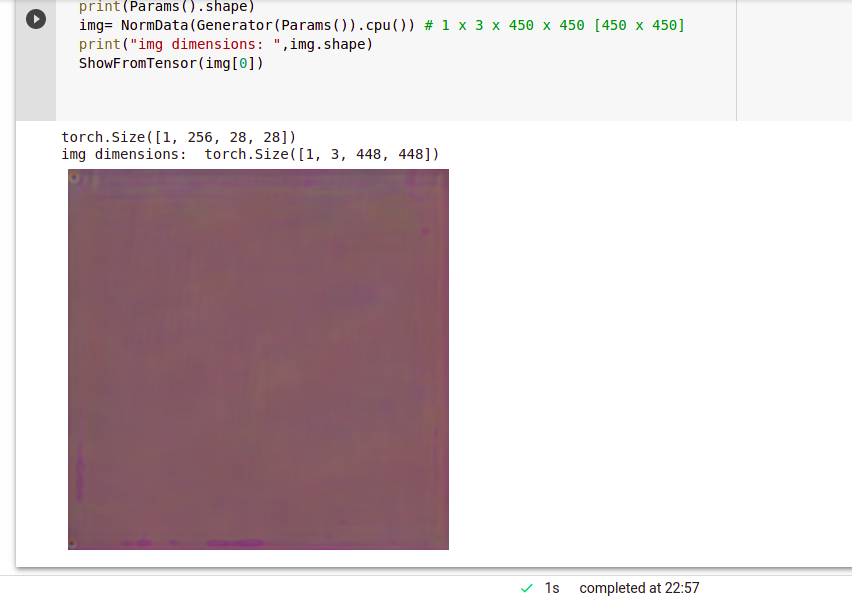 Create a function called createCrops. And let’s set default value 32 for no. of crops value. Add some padding around the image so that we can rotate, translate and preserve image information.

Now apply previously declared augmentations transformations (augTransforms). Set crops that is empty initially. Define a couple of variables or no. of pixels or numbers to use for offset and also for the amount of crop, here is gap1, gap2 defined.

Finally, add some noise to the crop. With noise factor and some random values from a normal distribution of the same dimensionality.

The lines that are in the above code are actually for the sfumato effect. (You will know at the end.)

Let’s create a function to see the generated image at any state:

Let’s don’t involve gradient here. Pass parameters that we’re used for the optimization of generator, to generate an example image at the current state of the parameters. (1 x 3 x 450 x 450)

And now call createCrops function to create crops but only one crop. Normalize the result and show.

Then for generation, the latest generation is going to normalize what we already generated. Finally, show the image.

Optimizing the mode by tweaking the parameters:

Let’s create a function called Optimize that will gonna receive the current state of the parameters, optimizer, and text prompt. Calculate current loss calling a function optimzeResult which we gonna declare. After this, calculate the mean we are gonna get the loss for each crop and calculate the average of it. Set optimizer to gradient value zero, do backpropagation, and tweak-update to step with values of parameters. So, this is an optimizing function.

Now, define the optimizeResult function which will find the lost value and lowest value that is gonna drive the optimize function. It’s gonna receive params, and prompt. Declare a couple of variables alpha, beta with values 1 and 0.5 respectively. They will represent the significance or importance of include and exclude encodings resp. (here, since alpha>beta, include will be important than exclude during encodings)

After this generate a new image from parameters and normalize the result.

[Note: To calculate loss, encodings of text prompts and encodings of image crops generated from the current state of latent space parameters should be compared. So we need to pass parameters through a generator to generate a new image so that we can encode it.]

And create crops, normalize them with extra normalization (for the images to match CLIP architecture). Then create an image encoding by calling the CLIP model. (32 crops composed of 500 so, encoding dimensionality be 512x512)

W1, W1 are weights for include and extras text encodings. Divide encoding values by their normalization to get them in the correct range.

Now calculate the loss using cosine similarity mathematical function. Main loss(include), penalize loss(exclude). (each of the 32 crops will be compared with the single encoding of include texts and exclude texts respectively)

Then total loss will be the summation of both losses as:

Create a function that takes parameters, optimizer. Initialize each of the encodings with iteration set to zero. Initialize parameter on every call.

Calculate the loss calling optimize function defined previously. And display the image as you want. Here, I’m gonna show image 1 iteration before the final iteration. So, call showMe function and declare prompts, increase iterations. In the end, you can delete the cache of GPU. 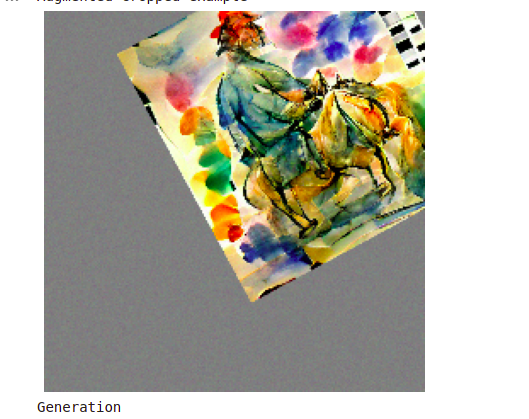 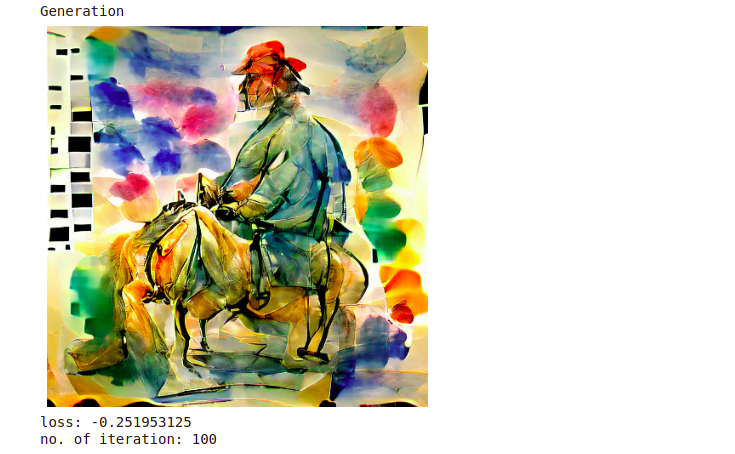 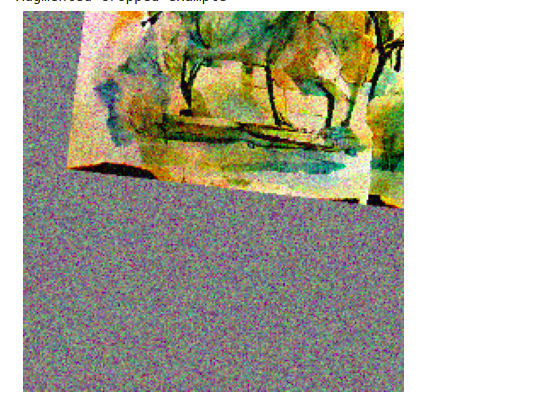 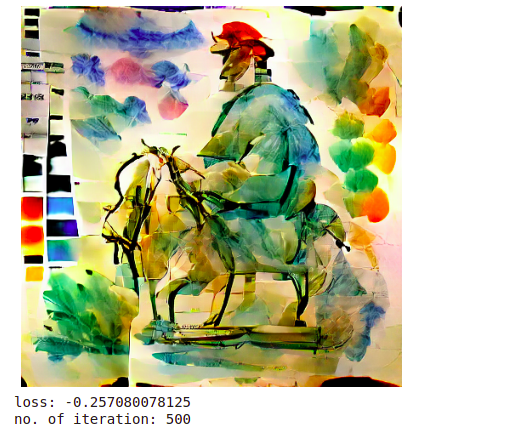 If you refresh and re-run from starting, it will show different images on the same step. It is because we’re using stochastic processes not deterministic.

Include: “A man fighting with a bull” 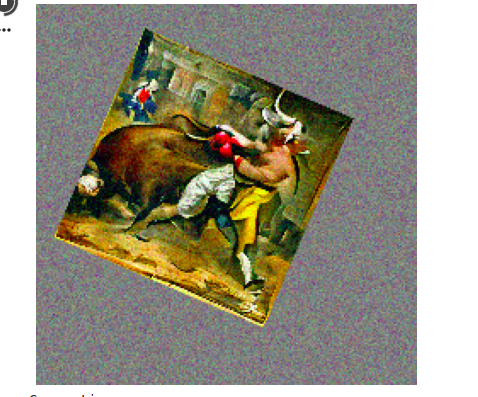 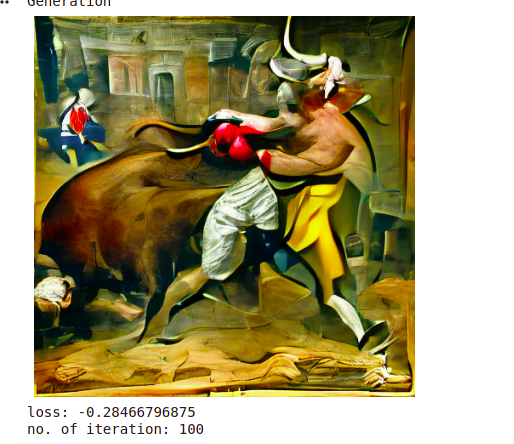 Include: [ “A man fighting with a bull”, “A dog sleeping in the park”, “People striking in the road”]

Next: Creating video from multiple representations/results.